On May 25, 1861, while apparently in a melancholy mood, Ralph Goodrich felt moved to write some poetry that he entitled, “Dirge.” It reads: 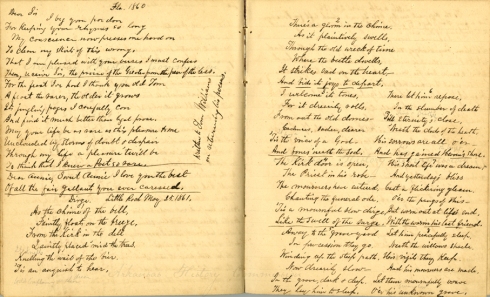 [Editor’s Note: Several weeks after the outbreak of hostilities between North and South and Arkansas’s withdrawal from the Union, Ralph received the following letter from his mother and sister Sarah. Apparently mail from the North was still being delivered though this appears to have been the last letter he would receive from home until Little Rock fell to Federal forces in September 1863.]

My dear Ralph.  It has been two weeks since I wrote to you. In that time we have received one from you. You write that you hear that mail is to be stopped between the North and the South. I hope not for any length of time, for we want very much to hear from you, and hope we shall often.

We think Mrs. Syberg is very kind to offer to board you through the vacation. We hope your school will prosper and the number of your scholars increases.

We are all usually well this morning. Stephen and Mary have gone to church. Sarah has been quite unwell for 2 weeks past. She has had a number of Job’s comforters – one that has been over two weeks coming has broke this morning and she looks and feels better already.  Your father got tired out and took cold planting corn week before last. It was very cold. They said it was cold enough to wear mittens, and [he] was quite sick a week ago, but is better now but did not feel well enough to go to church. They have got there corn and potatoes planted and yesterday Nic [Cortright] helped Stephen plaster. I got black Lucy to come and wash and help us two days last week. Sarah is so unwell she cannot work.

Mary went up to see Mr. John Taylor yesterday, but Mrs. Whyte would not let her go in to see him. He is crazy nearly all the time. Mrs. Whyte asked Mary if I took Burns home. She said Mr. Taylor gave that book to Ellen several months ago for knitting for him and they would give $5.00 rather than to have it. Now what shall I do? Give up the book or not? Please write and tell me.

We had a letter from Augusta. They are all well. Her children are having whooping cough but are having it light. You must remember you never have had the whooping cough. I hope you don’t think that you are not going to pay Mr. Platt [for the suit of clothes he made you]. I do hope you will pay him and pay as soon as you can for he is waiting his pay. It is hard times for us this summer. Butter is only 12 cents a pound, and eggs 9 and 10 cents a dozen. And that is all I have to get things with and pay my debts. I have paid all except to George B. Goodrich’s [store] and half of that is what I got for you. Two of our cows have not come in yet. We have only two new milch cows now.

Col. Ellsworth was shot [and killed] at Alexandria Friday. He was to be brought to New York this morning and on to Mechanicsville today where his father lives near Troy. I suppose there will be fighting near you soon. I cannot write any more at present. I have written to Augusta and must rest. Goodbye, — [Mother]

Dear Ralph. Ma has left a little place which I will fill up. It is such miserable cold weather here all the time. It takes one’s ambition all away. The season is so backward, nothing comes forward & the fruit will be scarce this year.

It is very exciting times here now. A battle is any day anticipated [and] will take place at or near Alexandria. We hear some of the Southern mails are stopped but I hope you will get this & that we shall receive all of yours.

Am glad your school keeps up the number. Hope you will be able before long to pay Platt. [Your cousin] Lucy Fiddis has not come home yet. Aunt Lucy [Fiddis] has a good girl & gets along well. I believe she has but three or four boarders now. You are not going to stop writing to [your cousin] Lucy Stratton are you?

Write home often as you can. We think of you very often. Goodbye. Ever your affectionate sister, — Sarah [Goodrich]

[Editor’s Note:  Not satisfied with his teaching position in Little Rock and desiring, perhaps, to move away from the battlefront, Ralph began searching for a situation elsewhere. The following letter was addressed to Rev. William E. Phillips of Donaldson, Louisiana.]

Dear Sir.  I have been advised to enquire of you if you know of any situation for a teacher in your Parish which I could procure. I am a graduate of Hobart College, New York, of the class of 1858, since which time I have been teaching, and for nearly the two past years in the South. I am a communicant of the Protestant Episcopal Church. Together with the classics & mathematics, I can instruct beginners in French, German, & Spanish. My recommendations are from the Faculty of the College & from Major George T. Ward & Ex Governor Brown, both of Tallahassee, Florida. Could you render me any assistance, I would be greatly obliged to you.  Yours respectfully, — Ralph L. Goodrich

Col. Elmer Ellsworth was the first officer to die in the Civil War. He was killed while removing a Confederate flag from the roof of an Alexandria, Virginia hotel on 24 May 1861.